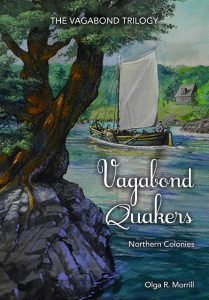 Vagabond Quakers: Northern Colonies is an historical fiction set in the mid 1600’s that reveals a period of American history that has largely been glossed over by our educational system. Based on actual occurrences and real people the book tells of the remarkable brutality the Puritan authorities of the Massachusetts Bay Colony inflicted on missionaries for the Society of Friends and their supporters.

By landing at Dover Point on the Piscataqua River in June of 1662, Quaker missionaries Mary Tomkins and Alice Ambrose elude arrest for six months. They are safe on the eastern bank of the Piscataqua under the protection of Nicholas Shapleigh, but as soon as they return to Dover in December, they are imprisoned for their faith and brought before the Puritan magistrate Captain Richard Walderne, who pronounces a harsh sentence.

Vagabond Quakers tells two stories—that of the women during their year in New England, as well as the rise of Richard Walderne from a young immigrant in 1635 to a wealthy magistrate and his clash with the Quaker missionaries in 1662. The early history of Dover Point and Boston is told in his chapters.

Author Olga R. Morrill will be at the Ossipee Public Library on Thursday, October 19 at 6:30 pm to discuss her research, read an excerpt from the book, and sell signed copies. Vagabond Quakers: Northern Colonies is also available on Amazon in trade paperback and Kindle formats. For details about the book and a full schedule of programs visit the blog at www.vagabondquakers.wordpress.com.