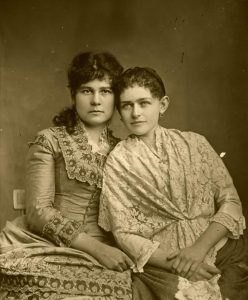 Would you like to see your relatives photos that you never knew existed? The photography of Herbert E. White (1865-1954) will be featured on Monday July 9th at 6:30 p.m. at the Ossipee Public Library. A collection of over one thousand glass plate negatives was donated to the Ossipee Historical Society several decades ago. These images were archived carefully, but their content remained a mystery.

While doing research on the town’s history, Brad and Dawn Marion came across the large boxes and recognized their origin and importance. Brad realized that the shadowy images on the silver coatings on these glass plates could be scanned and digitally restored to match what a contact photographic print would have looked like. With the Society’s permission, he restored the complete collection and has put it in a format so that it is readily accessible on a computer without any risk of harm to the originals. He also printed out copies and assembled them in a series of notebooks so that people can visit the library or the Historical Society and review the collection.

“I was stunned to see many images of relatives and buildings as they looked around the turn of the century [1900],” Dawn Marion said. “I have some photographs that my grandmother left me, so I can identify some of the people, but I was amazed by the amount of material we now had available to go through.”

Herbert White was a Moultonville resident. His brother George was a postmaster and operated a General Store. Two other brothers, Orlando and Charles, had started a larger establishment in Center Ossipee, which benefitted from its location near the train station. Herbert was an early partner in this store, called O. L. & C.A. White’s Strictly Cash, but had a strong interest in photography. He set up a professional studio in the back of the store and many of his customers were local people or travelers on the railroad.

“Not only did the Historical Society have this large collection of glass negatives, they also had the original camera that H. E. White used,” says Brad Marion. “It is a large, wooden box-style camera with an expensive lens. The dry colloidal process required a long exposure time compared to modern cameras, but was a dramatic step forward compared to earlier processes which might require people to hold a pose for one to two minutes. The alternative was for people to go to a county fair where they might get a single small tin-type.”

“This is a great opportunity for people to bring in their old family albums and identify photographs of relatives or dwellings. If you had a relative in the area between 1880 and 1920, there is a good chance you will be able to find their photograph by looking through the albums we have printed out,” says Dawn Marion. “If we had more of the photographs identified by name, it would add to the value of what is already a treasured collection of this period of local history.”